VINO LAS VEGAS has been well acquainted with Don and Lindsey Schroeder for several years . And have been fortunate to have seen them acquire well deserved recognition for their hard work.

Many may find the name CHIEN an interesting name for a wine. However , If you meet Don and Lindsey you know it fits them to a tee !

Don and Lindsey moved to the Lompoc Valley from Eureka, CA in early 2000 to help Don’s mother and stepfather by overseeing the installation of their vineyard, which is now the award winning Ampelos Vineyard.

As the vineyard implementation was under way they longed to have a friend on the ranch with them. Living in a farming community everyone seemed to have a “vineyard” dog . In May of 2000 they visited the Santa Ynez Valley Humane Society to see about adopting a dog. After carefully perusing each animal Don was drawn to one specific dog. All of the dogs had leapt at them in their kennels as if to say “PLEASE PICK ME!”

One dog did not. He was the only one to growl at them and for some reason Don felt that he could provide a home for him . The next day they returned to adopt Bear, a 2 year old male, Chow-Chow/Labrador mix breed. After trying unsuccessfully for almost 2 hours to get Bear in the truck they finally got him home. He had been neglected and abused before they brought him into their lives and for the first few nights , Bear would not come in the house without picking him up and carrying him inside . Every time they would leave the house he would scream and cry and when they would return home he would cry as if to tell them “thank you for coming back.”

Over the next few months Bear and Don developed a special bond. Eight years later Bear is an extremely well adjusted, happy dog that loves to cuddle and receive all the love that is given to him. We at VINO LAS VEGAS can attest to what a great dog Bear has become , and even enjoys running through the vineyards with our own dog we we visit.

“We chose the name Chien for one very simple reason. We have two passions in our lives, dogs and wine. Because we love the wines of Alsace we chose the name Chien which is the French word for “dog”. We feel that after raising 2 dogs, especially one that was so badly abused, making wine has a very similar foundation. Lots of love, patience and persistence is needed. We have that in abundance for Bear, Shady and Chien ” Don said.

Don took a job for the 2000 harvest with Babcock Vineyards and his passion for wine was born and he never looked back. Don said ” I had always enjoyed drinking wine and after working those first long days of harvest the passion inside me flourished”. Over the next few years , Don worked at various wineries and furthered his passion for wine and the wine industry. He is currently the wine maker for the renowned Seasmoke Cellars

Don and Lindsey launched their own label with Chien Wine . After harvest of 2006 they decided to make a small batch of an Alsace blend for the next harvest and created Edelzwicker, meaning “noble wine”, this wine is a traditional white blend of Alsace. The 2008 Edelzwicker was even named Wine of the Week by the LA times in March 2010.

Their blend consists of Riesling, Pinot Blanc and Gewurtztraminer. This crisp, balanced blend truly represents what they believe are the many beautiful qualities of these often under appreciated varietals. With the release of their 2009 vintage they introduce the first Santa Barbara County, and third California Gruner Veltliner. 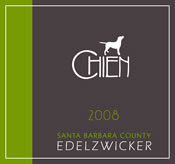 The 2008 Edelzwicker started with 1.3 tons of Pinot Blanc from Bien Nacido Vineyard and 2 tons of Riesling from Camp 4 vineyards. Each batch was picked under 24 brix and fermented separately in stainless steel tanks. This wine has never seen oak barrels. Their belief is that ‘in order to express the purest varietal characteristics, and preserve the quality of a white wine, it must be made in stainless steel.’ They bought a few gallons of Gewurtztraminer and added it to the final blend.

The Edelzwicker was bottled in early February 2008 and will show best in 3-5 years, it is meant to be a graceful ageing wine.

Don and Lindsey have such passion and love in everythinjg they do and this can we tasted in their Chien wines as well. We look forward to their next vintage and other white varietals that are sometimes over looked. For more about Don , Lindsey and Chien wines please visit http://www.Chienwines.com

They also support a very admirable cause with their wines. Chien will donate a portion of their profits each year to a very deserving animal rescue foundation, Noah’s Ark. Noah’s Ark has been rescuing and rehabilitating abused and neglected animals and children for 30 years. If you would like to donate directly to Noah’s Ark you can do so at their website: http://www.noahs-ark.org