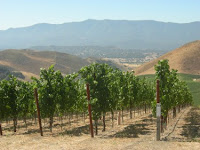 Happy Canyon AVA was approved in October and was based on a petition written by vintner Wes Hagen, whose Clos Pepe Vineyards are located in the nearby Sta. Rita Hills. Wes Hagen had previously written the petition that established Sta. Rita Hills as an American Viticultural Area (AVA) in 2001. We have watched the process of establishing the AVA over the last few years and It was a long time coming.

Happy Canyon AVA includes 23,941 acres and lies in the eastern part of the 40-mile-wide Santa Ynez Valley and the northern part of Santa Barbara County, California and comprises canyon terrain, hills, and river and creek basins to the east and south of the San Rafael Mountains, west of Lake Cachuma, and north of the Santa Ynez River.

Of all the grape-growing areas in the Santa Ynez Valley, Happy Canyon is the furthest inland and has the warmest climate. It is located in the easternmost part of the Santa Ynez Valley, and the daytime highs and nighttime lows in that part of the county vary more in a 24-hour period than those in other parts of the valley. At about 12 miles west of the AVA, the inland mountain ranges change direction from west-east to north-south. The north-south mountain ridge blocks the Pacific coastal breezes, preventing them from cooling the canyon. As a result, the ridge traps in heat in Happy Canyon during the warmer growing months.

Elevations within the Happy Canyon boundary line range from 500 feet in the southwest corner to 3,430 feet in the northeast corner, in the foothills of the San Rafael Range. Between the Pacific Ocean and the Santa Ynez Valley, hills and mountains trend west to east. As the elevation of the Santa Ynez Valley rises from west to east, the hills and mountains turn from a west-east direction to a generally north-south direction. The Happy Canyon viticultural area is located inland and lies along mountains and hills with a north-south orientation. 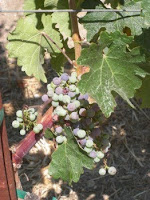 What makes Happy Canyon so different is its hot climate. The Sta. Rita Hills at the western end of the Santa Ynez Valley is the ideal climate for Pinot Noir. Hot Happy Canyon with its rolling terrain, high slopes and varied soils seem to be one of the best areas in the Central Coast for growing Bordeaux varieties. The soils in Happy Canyon range from sand and gravel to loam (rich soils composed of sand, silt and clay mixed with organic matter) .

The microclimates of higher elevations in this region have less temperature variation because the days stay cooler and the nights stay warmer than at lower elevations. This climate is best for Cabernet Franc, Cabernet Sauvignon, Merlot, Petit Verdot and Sauvignon Blanc. The heat is also good for Syrah and other Rhône varieties as well.