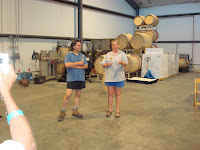 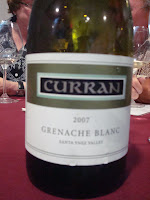 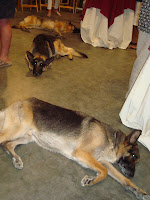 Kris Curran and Bruno D’Alfonso have been recognized by many as being tops in their field and it is not often you can attend an event where two winemakers of their quality are in the same place. In their case they have been married for many years but have made names for themselves individually and now as a team.Bruno has been making Pinot Grigio and Sangiovese under his DiBruno label since 1996. In 2005, he added Pinot Noir produced under the BADGE label. Kris has been the winemaker at the renowned Seasmoke cellars since 2000 and helped make Seasmoke Pinot Noir highly recognized as being one of the best . She has been making her own label, Curran which she started in 1997, at Sea Smoke’s facility in Lompoc. Curran Wines makes 1,200 cases per year, mostly of Rhone varietals and Sangiovese. 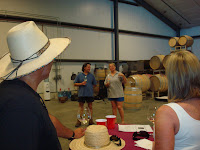 She has recently left Seasmoke for Foley and opened TRIO
( the wines of Curran , DiBruno and Badge ) tasting room with
Bruno in Solvang.We attended the D’Alfonso-Curran Food and Wine experience at their new winery.
Knowing the reputation of these two great winemakers we were anxious to attend this event to see what type of food pairings they came up with. We arrived at the winery and were impressed by its size and could only imagine what these two could do with wine in this large facility. Like us, they are “dog people ” because of surgical complications with one of their German Shepherds they could not use their new facility for the 2007 crush.We when first walked in, hard to miss were brand new french oak barrels still wrapped in plastic. Live music and of course those beautiful German Shepherds had the run of the winery. Kris and
Bruno , along with Chef Kurt Alldredge introduced each course and the pairings. The Badge Pinot Noir 2005 & 2006 Sta Rita Hills was a stand out as well as the Curran Grenache Blanc 2007 Santa Ynez Valley.

Chef Kurt Alldredge of The Chefs Touch did a great job pairing these
wines from Kris and Bruno. Many of these pairings really took some thought about either contrasting or complementing each course. 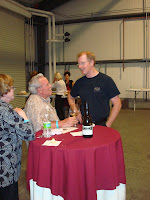 2006 Di Bruno Pinot Grigio, Sanford & Benedict Vineyard paired with Pears-jus-tart with ricotta and lemon zest. The was followed by the well known Badge 2006 BADGE Chardonnay, Sta. Rita Hills/Rancho Santa Rosa paired with Lobster corn dog with vanilla crème fraiche.
The next pairing really stood out for us as the 2007 Curran Grenache Blanc, Santa Ynez Valley paired excellent with Thai shrimp ceviche with toasted coconut and chilies . Of course you have to have a Pinot Noir from this very special appellation. Bruno’s 2005 BADGE Pinot Noir , Sta. Rita Hills paired with Duck-shiitake mushroom spring rolls with a star anise-cherry-pinot noir dipping sauce could not have been done much better.We were then treated with Kris’s 2004 Curran Syrah “Reserve”, Black Oak Vineyard with Crostini of chorizo and shaved bittersweet chocolate but we still had one course left. And Bruno’s 2004 Di Bruno Sangiovese, Stolpman Vineyards paired with Pulled short ribs with smoked marcona almonds and salted blueberries lived up to the challenge.Kris and Bruno did a great job showcasing their new releases , the winery, and great food pairing along with Chef Kurt. As we spoke about earlier, Kris is now at Foley. We stopped by Foley and sampled her new Foley Chardonnay ” Steel ” Sta Rita Hills 2007. This Chardonnay was refreshing with hints of citrus on the finish. If this Chardonnay is an indication of the future at Foley. We cant wait to see what Kris can do with the other varietals.