Before we look at the wine we took a look at the vineyard history, the region and the people behind it. Ventisquero began making wine in 2000. Unlike other wineries in the area they are led by a young, creative team of entrepreneurs whose mission is to create distinctive, high quality wines. In a word, this young eager team strives challenge the status quo, always searching for unique and different ways to accomplish their goal to create great wines.

Under the guidance of head winemaker Felipe Tosso, the winery was built in the Coastal Maipo Valley, Casablanca, Leyda and Colchagua . Felipe Tosso is the craftsman behind GREY, involving himself in every detail of production. He works the vineyards, selects the fruit, controls fermentation, and oversees the 18-month ageing regimen for each of the wines. Single Blocks from Maipo Alto, Casablanca and Apalta make GREY a rarity in the world of wines.

After looking at the winemaking it was now time for the panel to get to work and put the wine to task. The Vina Ventisquero Carmenere 2011 is interesting in that only 50% of the grapes are crushed. A pre-fermentive maceration is carried out at 8C for 5 days. The Carmenere is aged 18 months in French Oak barrels, 33% of them new and 66% second and third use.  The wine is then bottle aged for 8 months.

In the glass the wine showed hues of purple to garnet and medium bodied.  On the nose, blueberry and black cherry are prominent giving way to wet earth and spice. On the palate, big flavors of blueberry and cherry tantalize the palate followed by pepper, earth and slate, ending in a long finish with light feminine tannins. This Vina Ventisquero Carmenere 2011 is a beautiful blend of 97% Carmenere and 3 % Petit Verdot and nicely balanced acidity. 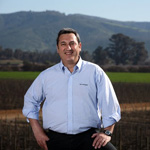 Drink the Vina Ventisquero Carmenere 2011 now or age 10 years when it will become more complex over time.  Look for this Carmenere , at $23.99 it is affordable and enjoyable.