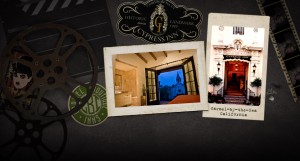 Carmel-by-the-Sea , those words pretty much sum it up ! This quirky, quant town with no addresses is perhaps one of the most interesting and beautiful towns we have visited in our extensive travels in the area.  Carmel is full of legendary boutique hotels, restaurants and lounges many of which are actual historic landmarks. 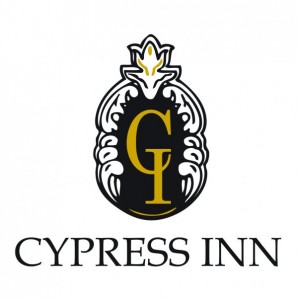 Spending the day walking around Carmel can make you pretty thirsty and we were told right where to go for a happy hour that featured, history, local cuisine and handcrafted cocktails from a mixologist , the historic Cypress Inn and Terry’s Restaurant and Lounge .

Upon arriving at the Cypress Inn, we were greeted by the very pleasant and knowledgeable General Manager Fiona who gave us quite an education on the long and storied history of the Inn. She explained, Cypress Inn is all about ambiance and decor, personalized service, amenities, and 100% dog-friendly so you can stay and dine with ALL of your family members. She added they specialize in   classic hospitality and old-world luxury.  They keep it intimate with only 44 spacious, elegant guestrooms and even a sunlit garden courtyard that looks like the ones you have seen in countless movies in times gone by.

While walking through the lobby we were overcome by the old world charm and art of all disciplines that speak of a time that embraced elegance and refinement. Really understanding this historical landmark gave us a true appreciation for what was all around us.   In 1906, Sidney J. Yard, an artist known for painting watercolors in the English manner, built Carmel’s first art gallery right which is now the Cypress Inn. The space was later used by another famous artist Miss Mary DeNeale Morgan.  Then In 1929 Dr. Rudolf Kocher, working with one of Carmel’s premier contractors, Hugh Comstock, constructed the present building. 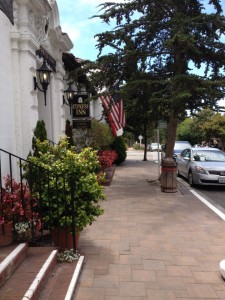 Originally the Hotel La Ribera,  it was featured in the local press when it opened as “one of the show places of the Monterey Peninsula.”  In the 1960’s, Earl E. McInnis and his son, Frank, took over management of the hotel and newly renamed it “Cypress West”.  It was restored and upgraded to its original splendor, enticing many of its nostalgic guests to return to their favorite hotel. Why so pet friendly you may ask?  For more than twenty years, Cypress Inn has been jointly owned by Doris Day and Dennis LeVett.   Doris’s long deep devotion to animals helped put Cypress Inn on the map as the “pet friendliest” Inn in the “pet friendliest” town in America.

Now that we knew the history, it was time to quench our thirst with the area’s best cocktail selection at Terry’s Lounge.  We can describe Terry’s as classy and intimate, making us feel once again like we were walking into a classic movie and we were the guests. 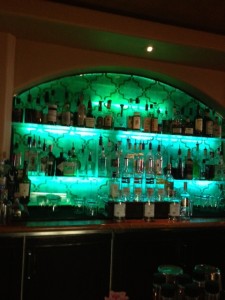 The Bar is dim with low green light hues shining onto glass shelves, showing off row after row of classic spirits and bitters.  The cocktail menu features quotes from classic Hollywood stars in each section of their diverse list.  As we approached the bar several stars of yesteryear have quotes ensconced on the wall, our favorite being, “The problem with the world is that everyone is a few drinks behind.”- Humphrey Bogart.   To help make the world a better place, we took our seats at the bar and began our exploration of spirits.

Looking over the list, we noticed some classic cocktails of course and some signature ones as well.  Always a favorite is the historic Sidecar.  This classic cocktail features Courvoisier, Cointreau, and fresh lemon juice.  Our knowledgeable barman explained, the renown “Harry’s Bar” of Paris is generally credited with inventing the Sidecar in the 1920’s for a patron who often rode in one. While many variations can be found, this is the original. 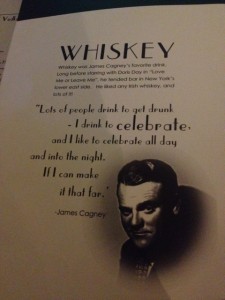 Another fan favorite for decades is also found on the list. How could we pass up the Perfect Manhattan. A mouthwatering blend of Maker’s Mark 46 Bourbon, sweet and dry vermouth and a dash of bitters. This personal favorite is named after New York’s Manhattan Club. Being so different at the time, The Manhattan took over the top spot previously held by gin martinis.

Many of the cocktails have a Hollywood connection. With yet another great quote we enjoyed, “You should get out of those wet clothes and into a dry martini.”-Mae West, 1937’s “Every Day’s a Holiday”. We took at look at cocktails with a movie star past that are on this one of a kind list. 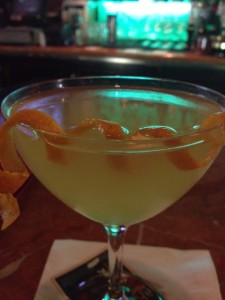 The Mary Pickford cocktail looked intriguing and its history is equally interesting. Sexy Leblon, Bacardi Superior Rum, pineapple juice, maraschino liqueur and grenadine was a cocktail we could not pass up. We learned that it was created during the 1920’s, for screen actress Mary Pickford and invented by Fred Kauffman at the Hotel Nacîonal de Cuba when Mary was filming alongside her husband Douglas Fairbanks and the legendary silent movie actor Charlie Chaplin. How’s that for some Hollywood history in a glass?

As we continued down our historical path of spirits we just had to dive into some gastronomic delights from the kitchen.  Being in site  of the white sand beach and deep blue water we decided to keep it fresh and local.  A lovely, perfectly crispy fried monterey Bay calamari dish was a good way to get started. These eight succulent gifts from the ocean had a light, crisp tempura with a mix of Middle Eastern spices and a mild Harissa aioli that married together perfectly.  Simple, fresh and divine, a dozen Oysters on the half shell with Lemon Shallot mignonette and tangy horseradish sauce “hit the spot.” 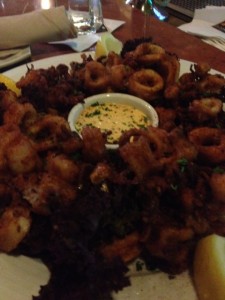 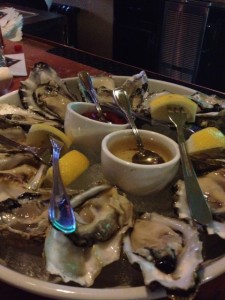 Our palates cleansed with fresh delights from the sea , we ordered up another cocktail with a Hollywood past.  The Marlene Dietrich Cocktail is the “biggest “cocktail we have had thus far. Consisting of Canadian Club Whisky, Grand Marnier, fresh orange juice over ice with orange and lemon peel garnish was a favorite of the day. Once again, our always educational barman said this libation was invented in a Hollywood nightclub in the 1930’s. Legend has it that Marlene Dietrich used to suck on lemons during film making to keep her mouth muscles taut for the camera and gave her that classic famous look. 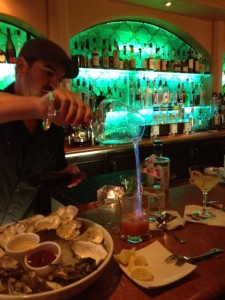 The list is so interesting it will take multiple visits to work our way through.  We already have a few targets in mind for our next visit. The Gibson, which features Boodles Gin, dry vermouth and a cocktail onion garnish. A common theory states this was named after a New York bartender who was tasked with “something different “He placed an onion in place of an olive in the customer’s (magazine publisher Charles Dana Gibson) gin martini and thus a new cocktail was born. Also tops on our list, The Stinger,An interesting mix of Christian Brothers Brandy and white crème de menthe. This classic was born during the prohibition out of the need to disguise the taste of homemade spirits!

Even though the bar is hard to leave, the dining area features amazing fare that is sure to please everyone.  For those who want to indulge in seafood Terry’s has several standouts.  Pan-Seared Scallops roasted with baby spinach and truffle red potatoes is sure to be a hit. Also, rich Dungeness Crab Cakes – served with orange, cranberry and Grand Marnier chutney will impress your palate. And why not a local treat? .  Enjoy Sixteen Monterey Sand Dabs lightly breaded and grilled, with tarragon sauce served with fingerling potatoes and seasonal vegetables to finish it off. 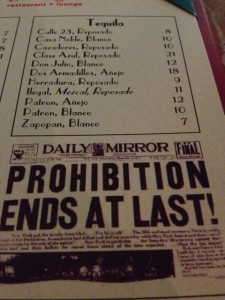 For the carnivores at the table,  a must try is the  Braised Short Ribs in  red wine reduction, seasonal vegetables, rosemary and parmesan cheese baked polenta or the Lamb Lollipops, Pan-seared with mint-pistachio pesto and sweet potato fries. No matter what culinary mood you are in, Terry’s has a cocktail and a dish for you to enjoy.

Visiting The Cypress Inn was an experience that we will do again and again. If you are in Carmel, stop in to the Cypress Inn, bring your pet, feel the history and enjoy great local cuisine and a classic cocktail. It will be a memorable occasion.