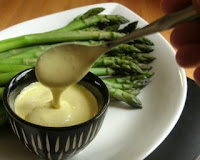 Aioli is a French sauce made by mixing lemon, eggs, garlic , and olive oil into a smooth, creamy mixture resembling mayonnaise. It originates from Provençal cuisine, where it is served with meat, fish, and vegetables, and the distinctive garlicky sauce has also been adopted by other nations to add zest to otherwise ordinary foods. Like mayonnaise, aioli can be made at home by a patient cook with a steady hand. Also like mayonnaise, aioli involves working very precisely with finicky ingredients which are apt to curdle if mistreated.The two most important things to keep in mind when making aioli are temperature and speed. All of the ingredients should be at room temperature to prevent curdling, as slight variations may encourage separation. In addition, aioli needs to be worked with at a consistent, even speed which is not too fast but not too slow, either. Usually it takes several episodes of trial and error to make a successful aioli, and cooks should not be discouraged by early failures.

To make aioli in the traditional style, the cook starts by grinding garlic and salt together in a mortar and pestle. Several egg yolks are mixed in and the mixture is whisked together before olive oil is added in a thin stream while the mixture is constantly whisked. When it begins to thicken and turn creamy, lemon juice and water are added slowly to the aioli, and followed by more olive oil to create a dense, creamy sauce.

INSTRUCTIONS :
Place garlic, lemon juice, zest, and egg yolks in a blender or food processor. Blend until the ingredients are combined. With the machine running, remove the lid and slowly drizzle in the olive oil. When well combined, taste for seasoning, adjust if necessary, then add the red peppers and pulse until aioli is speckled with them, but not fully blended. Refrigerate until it sets up.

If all the aioli is not used, the remainder should be refrigerated in a sealed container, and will last for several days if it is kept at a constant cool temperature. Never try to save aioli that has been sitting at room temperature after it has been made. If you are concerned about food borne pathogens in raw eggs, you can approximate aioli by mixing olive oil into commercial mayonnaise, which is made with pasteurized egg products, along with lemon juice.

The Cuisineist made this recipe in our kitchens and created a dish that looks and tastes very gourmet and very French . It also allows for the cook to made additions or substitutions such as substituting the red peppers with anything the cook feels would complement the dish it will be served with.

Have fun and happy cooking !