Good vs Evil, it was not hard to imagine who would be Good and who would be Evil when the two legends appeared at the Palms Resort. VIP guests arrived at the new Social lounge for some passed appetizers and appropriately a Bourbon Tasting.

Walking into the lounge we saw him right away, Chef , Author, TV Host , the Man who tells it like it is all over the world, Anthony Bourdain seated at the bar and of course a libation in hand. Speaking with him briefly we left him to his work as long time friend and renowned god of the kitchen Eric Ripert arrived and joined him.

We really didn’t know what to expect these two Chefs would be doing on stage as that is usually not their home as we know it to be. The Pearl was abuzz with excitement as Bourdain walked out on stage and quickly introduced his friend Eric Ripert. This was a show that was very unique and kept us rolling in our box seats most of the night. 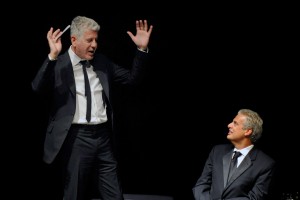 We weren’t prepared for a “comedy show” but we surely got one. Good VS Evil kicked off with each of the evening’s hosts roasting the other one. They left no topic untouched and bantered  about the food industry (from sustainability to ingredients), fellow chefs (Ramsey, Fieri and Paula Dean) and the current state of dining trends (Guests paying  up to  $350 to experience a meal Ripert’s landmark restaurant Le Bernardin). At one point, Bourdain had Ripert blindfolded and fed him fried Twinkie and then opened up to an audience Q&A that was very spirited to say the least. This unique show, which they have performed several times over the past year is getting ready to hit a few more markets this spring and is well worth attending if it comes to a city near you.

After laughing and being entertained for hours, a small group gathered with Bourdain and Ripert at The View atop the Palms’ Fantasy Tower for a VIP meet-and-greet.  Guests snacked on culinary creations by Simon Restaurant & Lounge at Palms Place, N9NE Steakhouse and sipped on Patron and Imperial Vodka cocktails. Chefs Kerry Simon (Chef/Partner at Simon), Barry Dakake (N9NE Executive Chef) and Doug Bell (Heraea Executive Chef) joined the after party and enjoyed bantering with Bourdain and Ripert.

Good v Evil was provided a very entertaining evening. All that attended were pleasantly surprised with the candor Bourdain and Ripert exhibited.