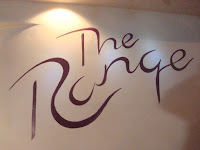 SUNSET Magazine’s 1st SAVOR The Central Coast
featured the best everything the Central Coast of California has to over from
world class wines , sustainable and organic seafood , grass fed beef and free
range chicken as well a fascinating history that pre-dates the United
States. Winemaker dinners were held all over the Central Coast.   We joined
winemaker Mike Sinor at the Range in Santa Margarita for a dinner that still has
our mouths salivating for more. 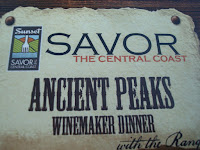 The daily topic as guests attended the many SAVOR
events was “where are you going to eat tonight ? ”  We answered we were going to
The Range in Santa Margarita for a dinner under the stars .  The reaction was
always the same.  ” The Range ?  You will LOVE  it !  ”  We have felt that we
know this area pretty well but , The Range is the best kept locals secret we
have found in this area for a very long time.

Jeff and Lindsey
Jackson offer an old west , casual atmosphere and feature a menu that is
constantly changing.   The menu shows Chef Jeff’s  inspiration to source
products from small local producers many of which produce organic and
sustainable goods.  His wine list of course features the best of the central
coast as they are located right in the middle of it.  This restaurant is small
and keeping with its old west decor and atmosphere , no reservations or credit
cards are accepted.  First come , First serve is their motto so our suggestion
is to get there early. 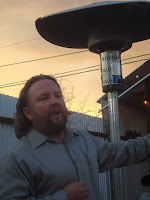 As the appetizer of Bloom Micro Greens  and
Ancient Peaks Sauvignon Blanc 2009 was served , winemaker Mike Sinor explained
the wonderful history of Ancient Peaks Winery. Millions of years ago the ocean
floor rose and  the earth’s coastal plates  collied and  formed tall peaks that
surround their organically farmed Margarita Vineyard near Paso Robles.  Ancient
Peaks has produced wines that have caused  quite a stir in the world of wine.
For example , the Oyster Ridge 2006  earned 90 points from Wine Enthusiast , the
Zinfandel 2006 scored a very nice 93 points from Wine Spectator and the Merlot
2007 earned 90 points and was Editor’s Choice of Wine Enthusiast.

This family owned
winery specializes in estate-grown fruit and is owned from three long time
winegrowing famlies the Filipponis , Rossis and Wittstroms. Mike Sinor is a
hands on winemaker and makes sure the vineyard’s true character is reflected in
his wines made  with Sustainable viticultural practices.  The Margarita Vineyard
has earned the very difficult SIP  ( Sustainability in Practice ) certification
that shows the quality of the winemakeing that is done in the vineyard . 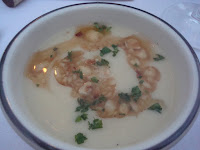 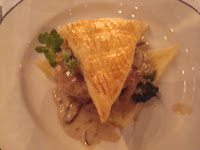 Course Two:
Roasted Cal Poly  Organic Free Range Chicken , Kendall farms creme fraiche and shitake mushroom stroganoff in puff pastry.
Ancient Peaks Malbec 2007
We  had many great dishes over this one of a kind weekend , but this dish is most
likely THE BEST dish we had the entire time we were in this very special area.
The chicken was moist , full of flavor as the shitake mushrooms added body and
earth elements that paired well with the Malbec. 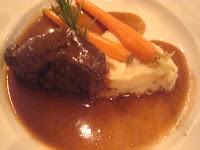 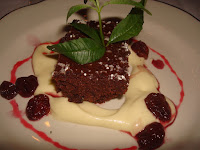 Course Four :
Bitter Chocolate Torte
Cabernet Sauvignon , plumped cherries and chilled cardamom
sabayon
Ancient Peaks Cabernet Sauvignon 2007
Yes,  you  can use a big Cabernet with dessert when done correctly. This  Cabernet
Sauvignon from the close by Margarita Vineyard  was a  spot on pairing with the
last course.  Aromas of plum and cherry come through on the nose with cassis and
black berry jam ending with a long finish with balanced tannins. 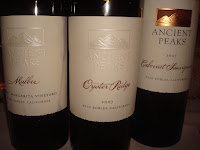 Historic Santa Margarita provided a very special
backdrop at The Range and Ancient Peaks winemaker dinner.  This intimate affair
at SAVOR the Central Coast provided guests a dinner that showed off the food and
wines of the area with an historical and sustainable perspective. Both terms
describe the Central Coast of California to a Tee . We travel this area often
and we know The Range and Ancient Peaks Winery will be two stops we will not
miss