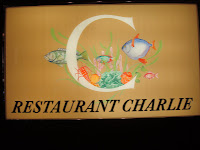 Charlie Trotter is no stranger to awards . He is a multiple James Beard award winner as well as Author and TV Host. Receiving a Michelin Star after being open only seven months is quite an accomplishment.

The Cuisineist  was invited to see Chef Trotter demonstrate and discuss how kaiseki and omikase influence the cuisine of Bar Charlie. His latest dining concept is bold , innovative and a welcome addition to the world of gastronomy. At Bar Charlie we also explored cocktail pairings that began in Chicago at Charlie Trotter and has grown into one of the most innovative mixology programs we have seen.

After experiencing such a culinary artist as Chef Charlie at work , we stayed and enjoyed an exquisite multi course meal at Restaurant Charlie. 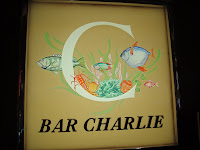 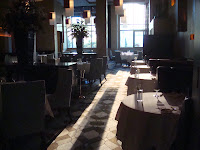 After being seated at the very sheik Restaurant Charlie we started off with Rene Geoffroy Brut Rose to get our palates ready for what was coming . 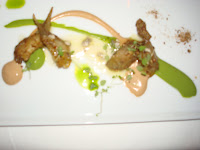 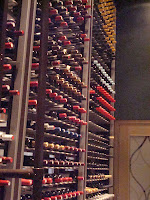 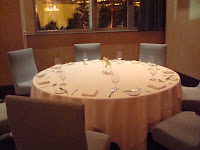 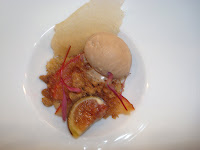 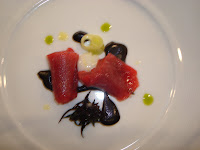 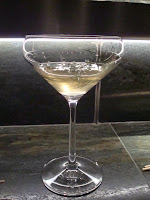 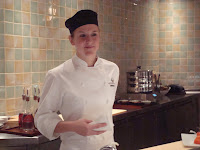 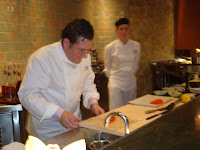 Five courses all paired with wine AFTER sampling the cuisine at
Bar Charlie with Chef Trotter was an experience that we will treasure. 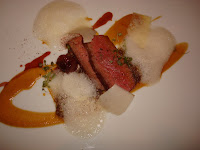 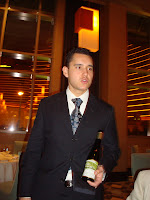 Restaurant Charlie’s menu is primarily a la carte although there are tasting menu options to choose from as well.

For those who desire a unique experience ,Chef Trotter created a Kitchen Table Skyloft. Located high above the kitchen. The Table Loft provides a bird’s eye view of the activity in Chef Trotter’s kitchen.

Restaurant Charlie features a drinks bar which aligns with Chef Trotter’s “seasonal” approach. In addition to the classics, the drinks bar offers two cocktail menu styles: Vintage pre-prohibition classics and modern. Using only the finest ingredients the drink offerings are changed seasonally and truly reflect the skill of their team of mixologists.

The Palazzo provides a classy location for many restaurants where you will fine some pretty big names in the culinary world. Restaurant Charlie and Bar Charlie provide a wide variety of cuisine and classic cocktails at the bar with a Mixologist that creates drinks that only are limited by your imagination. The wine list is international with the personal touch of Sommelier Desmond Echavarrie who has many wines you may not have enjoyed in the past.

Restaurant Charlie was awarded a Michelin Star in 2008 after being open only seven months. When the 2009 awards are announced it would not surprise us if they become a multiple Michelin Star award winner.